Why You Should Take the Stairs Instead of the Elevator 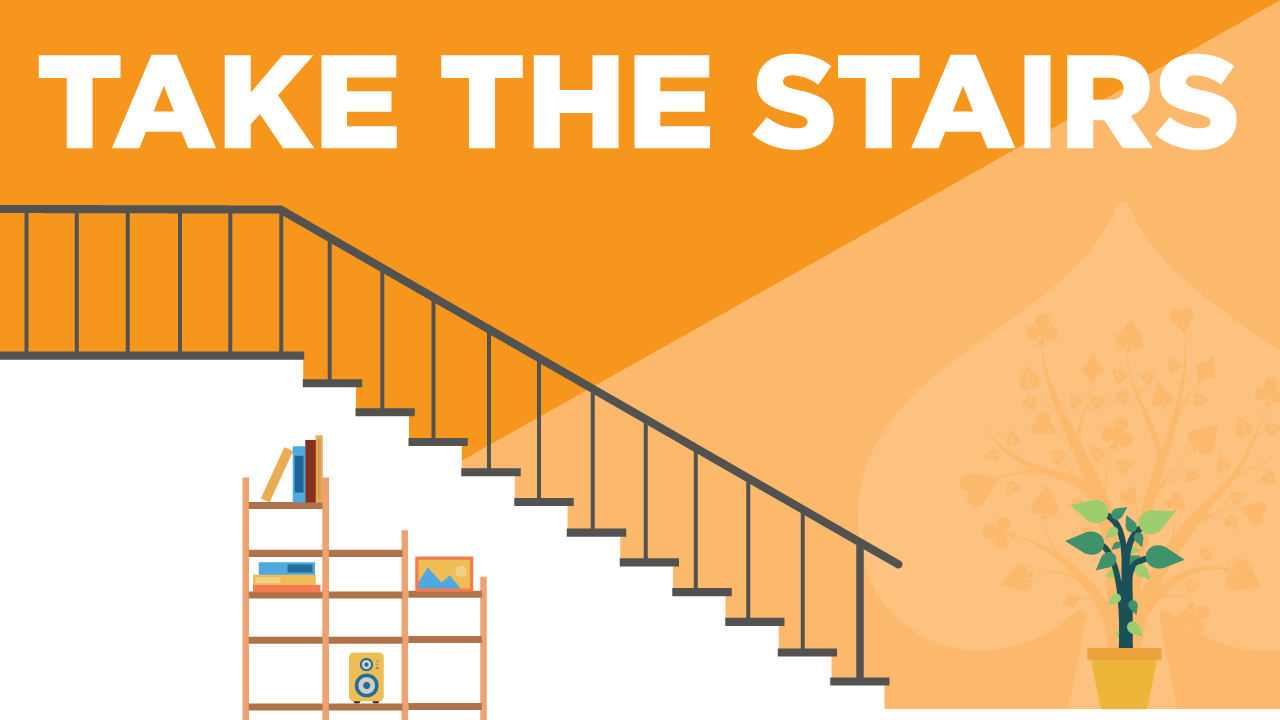 Our apartment rests on the 4th floor of our building, which means each time I come home I’m faced with a choice: should I take the stairs or the elevator?

As someone who’s obsessed with making the best decision possible, I’ve pondered this conundrum for quite some time.

Determined to find the optimal strategy, I started by timing myself walking up the stairs at a normal pace and compared that to taking the elevator. After multiple attempts, they produced an equal result.

The solution seemed obvious: run. This proved difficult, however, as I often wore nice shoes or sandals, carried groceries, or simply because the pounding of my feet produced a loud echo and disturbed the neighbors.

My first attempt at solving this problem failed.

One observation stood out though. The time it took to get to my apartment was the same, whether I walked or rode the elevator, but only if the elevator was already on the ground floor waiting for me.

If I had to push the button and wait for it to come down, it was quicker to simply take the stairs instead of the elevator—I could save 18 seconds per trip by walking.

I found what I thought to be the obvious solution to optimize my commute: take the elevator whenever it was present and the stairs when it wasn’t.

This was my default operating mode for the better part of a year, and the suspense of uncertainty made coming home fun. Would I be walking or riding?

Sure, there were times when I desperately wanted the elevator to be waiting for me: on a humid summer afternoon, after an excruciating leg workout, or when I was carrying two six packs of water.

Then there were times when I preferred the exercise, like when I skipped my gym workout.

But still, I made my choice to not choose, leaving my options to chance.

I originally thought outsourcing a trivial decision to fate was a great idea. After all, science reminds us that humans fall prey to ‘decision fatigue’, and we can only make a limited number of great decisions on any given day.

Many high performers took this to heart. It explains why people like Obama are famous for saying, ‘You’ll notice how I only wear blue or grey shirts and that I don’t make decisions about what I’m eating, because I have too many other important decisions to make.’

By automating a seemingly trivial decision, I preserved precious energy to focus on more pressing matters involving optimization, such as whether to eat before or after my cold shower.

Take the Stairs Instead of the Elevator?

But despite my greatest efforts, the problem of taking the stairs instead of the elevator presided. Whenever I rode the elevator, I would feel a slight sense of guilt for taking the lazy route. The growing disappointment came to the point where I realized it was time to evaluate my process for getting home.

Originally, I believed my priority was efficiency. I wanted to take whatever action that would get me from the lobby to my apartment in the least amount of time.

However, after taking both the elevator and the stairs, it became evident that something else was at play.

On a greater note, taking the stairs instead of the elevator alluded to my mindset for the day. On mornings where I was incredibly motivated, I’d fly up the stairs without hesitation. I couldn’t help but notice these were days where I was also highly productive in my work.

On other mornings, I’d guiltily hop in the elevator; consequently, on these days, I’d waste more time on social media.

Since I usually go out first thing in the morning, I wondered: was taking the stairs simply a by-product of my self-motivation, or did the conscious decision to exert myself increase my motivation? In short, which came first, the chicken or the egg?

The Meaning You Attribute

The truth is somewhere in between. Some days I woke up in 5th gear and taking the stairs instead of the elevator came naturally. Other days, it was arduous. But most days my motivation was in-between. I typically didn’t fall on either extreme of the spectrum; rather, my actions dictated the outcome of my day.

In short, I began to treat taking the stairs instead of the elevator as a daily challenge to prime myself, and by simply doing so I felt more empowered throughout the day.

You’ve heard the wonderful adage, ‘the way a person does one thing is the way they do everything.’ Over time, I increasingly felt taking the elevator was a cop out and each time I did, it reinforced the idea that I was lazy.

(I acknowledge this interpretation is quite arbitrary. I also believe it’s not the things that happen to us that matter, but the meaning we assign them, but that’s a subject for another blog.)

Why I Take the Stairs Instead of the Elevator

Slowly, I began consciously choosing to take the stairs instead of the elevator. This seemingly trivial 20-second effort increasingly left me with a sense of satisfaction.

Taking the stairs instead of the elevator became a symbolic gesture that I wasn’t going to take the easy way out, even with the small things in life. Each time I used willpower to walk instead of ride, my confidence grew. I was subconsciously reinforcing the belief that I didn’t cut corners and was willing to put in the effort where others weren’t.

This idea isn’t new and can be applied to every facet of life. As Naval Admiral William McRaven, the commander of U.S. Special Operations, so simply stated in a 2014 commencement speech at University of Texas at Austin, said:

“If you make your bed every morning you will have accomplished the first task of the day. It will also reinforce the fact that little things in life matter.”

Today, I always take the stairs instead of the elevator by default (except on Sundays, when I force myself to rest). I do it when I’m tired, when carrying groceries, and when it’s hot. I’ve conditioned myself to the point where I no longer have to use willpower: it’s become automatic.

I’ve grown to like the effort, followed by the reward, of pushing myself even in the little moments in life. This small yet effective training has been a daily reinforcement that I’m willing to go the extra mile, that details matter, and most importantly, that if I’m always looking for shortcuts to get somewhere, how will I ever accomplish anything great?

Hope you enjoyed this post and thanks for your attention.
Alec

What I Learned Staying at a Fully Sustainable Villa in Tuscany, Italy