Poker Bot – Will Machines Ever Beat Humans at Poker 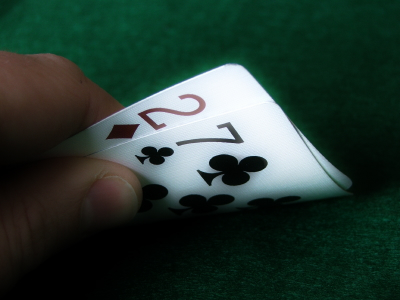 The recent ‘Brain vs. AI’ matches between Claudico, the most advanced poker AI in the world to date, VS. 4 of the best Heads Up No Limit Hold’em players in the world has left the poker community wondering: will a machine ever beat a human at poker?

The question is boring for the answer is trivial. Absent of some global catastrophe that sets us back to the Stone Age, it’s an absolute certainty.

The real question is: When?

Despite the pros smashed Claudio for over $730,000, I’m convinced our time as the superior species for poker is coming to an end.

In 1990 Ray Kurzweil boldly predicted that a computer would beat a human at chess by the year 1998. Everyone thought he was crazy at the time, but on May 11th, 1997 Deep Blue defeated Gary Kasparov, widely considered to be the best chess player of all time.

Perhaps more impressive than the prediction itself was his confidence in what would happen afterward, when he stated that the significance of the event would be dramatically downplayed.
And today it is.

That’s great, you say, but chess is a solved game with a finite amount of solutions. I can see how a computer may be superior at those things, but a machine will never be able to interpret and understand human language, culture, and knowledge.

But poker is just too complex, they say. They said that about chess too.
But poker is nothing like chess because there’s a human element that cannot be quantified.

Let’s look at the numbers. Chess has roughly 1050 possible variations whereas Heads Up No Limit Hold’em has 10140.

There’s no question that poker is a vastly more complex game than chess, but mere complexity doesn’t mean a machine cannot do it better. (This also explains why the mere fact that it hasn’t happened yet doesn’t mean it won’t).

One must keep in mind that in order for this feat to happen the machine doesn’t need to play perfectly, it merely needs to play better than humans.

The Power of Computing & Law of Accelerating Returns

The Singularity is the theoretical point in time in which technology will be so advanced that machine intellect will surpass that of humans. Machines will then be able to create even more intelligent machines leading to capacity beyond the understanding or predictions of humans (hence the name Singularity).

If this seems like hogwash, recap the last century to see what the past rate of acceleration tells us about the future.

Moore’s Law (actually an observation) broadly states that the price-performance of a given technologies will double in power every year.

Historically this has been true over the past 50 years and has remained constant despite wars, recessions and every other natural human event.

Doubling, or exponential growth, is much different than linear growth.
Humans think linearly.
One. Two. Three.

Ray Kurzweil, chief engineer for Google, founder of the Singularity University and widely considered to be the leading expert in the field, says 2045. The median estimation for at least a 50% probability that machine intelligence will surpass humans is 2040.

If the mid 2040’s are a fair approximation for a machine to be smarter than a human, then surely the point at which a machine will triumph in poker is far sooner.

I’m neither scientist nor mathematician, but 2030 seems like a reasonable guess.

The Future of Poker

Many people think poker will die once this happens. That all action will dry up because the game will (in effect) be solved.

I highly doubt this to be the case. While it is true that a machine with extraordinary computer power will shed new insight into how the game of poker should be played (thus making the pros even better), people will still love to gamble, and the game will still have that magical hidden element – luck – which allows inferior players to win, thus keeping the game fun.

Information Only Benefits Those Whom Use It.

Yes poker will become harder to win at. Edges will become smaller. Such has been the reality every year since the games inception, and dramatically more so since its popularization in 2003 (another example of the power of exponential trends).

An increase in competition doesn’t mean poker won’t be played, nor does it mean there won’t be money to be made. History has shown the opposite to be true.
Pro baseball players had second jobs in the early 1900’s. Look at them today.

More information only assists the better players, namely those whom are willing to put in the time to study and then implement what they learn.

So don’t despair, yet. There will always be ways to find an edge. And when humans cease to be the superior decision makers, we’ll turn to machines for answers to augment our ability even further.

It’s very similar to what we do already. Without statistical analysis programs like PokerStove and Holdem Manager the game pretty much can’t be beaten.

These tools have allowed a new breed of poker pros to rise, leaving another practically extinct.

It happened before. It will happen again.