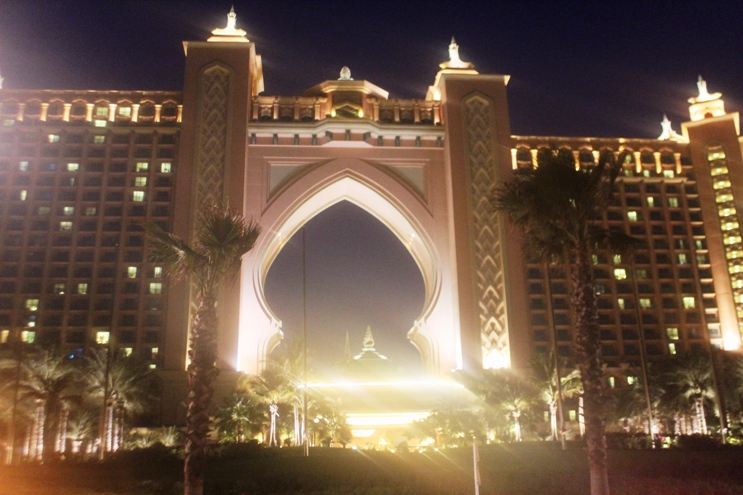 DUBAI: BY THE NUMBERS

Ranked 18th in the world in most competitive tourist destinations
Near the bottom of historic sites and natural beauty
3rd in friendliness to international tourists
10th in public safety
1st in marketing
Everyone speaks English
Dubai is surprisingly affordable
75 degrees: the average high in winter. In summer, it exceeds 120.
22,000 gallons: The amount of water the fountains of the Burj Kaliffa spray simultaneously
4 Dirham ~ $1

I would be lying if I said I wasn’t scared. There was something uneasy about him; the slow, calibrated movements, the feigned understanding, the quick responses. It was as if I was already guilty.

The truth is I didn’t have much to hide. The man in the green uniform – dark hair, unshaven beard, and colored skin – sifted through my backpack, examining each item one at a time. When he found something suspicious, lipstick or a notebook, he looked up at me. I tried to make a joke: “For the lady”, or conversation: “we were reporting on the gelato in Italy.” He said nothing.

“Why did you come to Dubai?” he asked.
“Vacation.”
“What is this?” He held up a copy of “The New Yorker”. I was careful with my tone. Not serious, not sarcastic. Factual.
“A magazine.”

Certain things didn’t bother him: a pill case with my name on it, a plastic ziplock with currency from four countries, a wallet with credit cards. Others, scraps of leaves from a hike in Germany begged questioning: “Do you smoke?” he asked. “No.”
“So this isn’t marajuana?” He held the leaves up again, brown and decrepit.
I was too scared to laugh. “No. They must have fallen in my bag – “, but he put his head back down, indifferent.
He smelt it.
He repeated my words as if to a child, “are you sure they just, ‘fell into your backpack.'”
“Yes. I went hiking in Germany and…”
“I see,” he said. “Ok.” I hoped he believed me.

“And what are these?” He had an air of satisfaction in his voice.
“They are poker chips. From Vienna.”
“How much are they worth?”
“Fifty euros.”
“Do you have anymore?”
“No.”
He spoke Farce to his colleague, and the two of them looking at me while they talked. When they were finished, my interrogator said, “come with me.”

With my girlfriend close behind, I followed him to the customs office.
“Is something wrong?” I asked.
“These are not allowed here.” I apologized profusely, and pleaded ignorance. “Ok,” he nodded.

When we reached customs he passed me on to another, more friendly officer who explained to me that gambling was illegal in United Arab Emirates (UAE), and so were my poker chips. When I asked him the procedure, he told me not to worry, “we will just destroy them.” It wasn’t very reassuring.

The lady at the desk asked for my passport. She wore a large traditional Ghutra, which covered her hair. When I handed it to her, she didn’t even look at me. It wasn’t that she was upset, but offended. “These aren’t allowed here,” she said. “Don’t bring them again.” I left the airport immediately, thankful I didn’t have more.

After a brief nap, we walked on the JBR, a shopping district that borders the beach. With every major store from Starbucks to California Pizza Kitchen, it’s a tourist trap, and it reminded me of South Beach, Miami. It wasn’t until I saw a girl ride a camel on the sand that I realized we were a long way away.

Dubai, whose ruling family, the Maktoum, have been in power since 1833, is truly immaculate. The embedded mindset of “bigger, faster, better” seems to have historic routes. “In the mid 1980’s,” – as Jim Krane, author of two books on Dubai (City of Gold and Dubai: The Story of the World’s Fastest City), writes – Sheikh Mohammed, two decades before becoming the Dubai ruler, tinkered with the idea of turning Dubai into a vacation destination.” When he was mocked by the ministers: “What is there in Dubai to make it a tourist attraction? You have nothing but humidity, red-hot sun, burning sand and barren dessert!”, he began to build. At the height of the economy, in 2002, Sheikh Mohammed allowed foreigners to buy homes. The result: a gold rush.

Perhaps, as a result of the young Sheikh’s experience, the city takes every chance to boast. At the Burj Khalifa, for example, there is a self autographed memoir signed by the building itself, a testament to its own greatness. As if the title of ‘World’s Tallest Everything‘ isn’t enough, a touch screen display is available for users to view the stunning building projected onto a digital map of any city of their choosing. The purpose, it seems, is to see it’s grandeur conquer the rest.

The city, as well as the inhabitants, are also proud to admit they have the world’s biggest mall, indoor ski arena, fastest and longest running elevator and a number of other trivialities, each fact emblazoned throughout the land, like billboards for a presidential candidate.

Dubai is also miserably hot. With 105 degree weather and over 50% humidity, even sitting outside is a chore. As a result, we spent the entire second day at the hospital, after I fainted on the sky train. My head collided so hard with the door that it made a dent. Fortunately, the ER is as nice and efficient as the rest of the city, and I felt comfortable with the English speaking staff. I was given a number of tests, the most scary being an Electroencephalogram (EEG), a test to measure brain electrical activity, which involved putting 21 probes on my head and forcing myself to hyperventilate. When I was finished, the doctor found some inconsistencies, and told me it was possible I had epilepsy. Tilt. We repeated the test the next morning to look more closely. I passed unharmed, and my head didn’t even have a bump. Once again, I left grateful.

On our last day we saw what we intended; the Dubai Mall and the Burj Khalifa. Both were incredible. The mall has over 1,200 retail shops and spans over 12,000,000 sq feet, roughly the size of 50 football fields. We window shopped and sampled local cuisine. Among the things we tried were a pakistani curry, Booza, an ice cream made with bubble gum (read about our experience here) and chocolate made from the milk of a camel (they also offer coffee drinks called camelccino). But undoubtedly the best discovery was Bateel, a local artisan shop specializing in dates, which are featured in all varieties: candied with ginger, sweet with orange or caramelized with pecan (read about our experience here).

The mall also replicates the best stores and eateries from around the world, from Pottery Barn to Bloomingdales; from Eric Kassler, a famous bakery in France to Magnolia’s, the beloved pastry shop in New York City.

From the inside, the only way one can know they are in the middle east is how people dress. Women cover themselves from head to toe wearing Niqab and Hijab – an Arabic noun meaning “to cover” and a required dress in many middle eastern countries – while men wear Thobes, a long white robe with sandals. It felt like we were in the company of royalty, the only way to distinguish one Prince from another were the size of the diamonds in their watch. My girlfriend was bemused by the amount of designer stores in the mall. “If they all wear the same outfit, she asked the attendant, “what’s the point of owning expensive clothing?” She was matter of fact: “They wear it underneath.”

The area surrounded the mall is a crushing replica of Las Vegas, with a skyline that rivals Singapore. Its fountain, which I watched religiously every half hour, is designed by WET, the same company responsible for the ones at The Bellagio. And since everything about Dubai’s is bigger, it cost over five times more to build, ($218,000,000), is four times the size and shoots twice as high.

The water show is so massive that, when I was standing in the middle, I had to turn my neck 180 degrees to see it in it’s entirety. Yet despite it’s size, it carried many moods. Graceful it was to the sounds of Andrea Bocelli and Sarah Brightman’s classic Time to Say Goodbye, romantic to Whitney Houston’s I will Always Love You and powerful to the beat of Hussien Al Jasmi, Asber Ala Fargakom. The experience borders on overwhelming when one considers the fact that the fountain flows in front of the Burj Khalifa, a building so big that it causes a kink in my neck when I tilt it back to see the top, like being in the front row of a movie theatre.

The top of the Burj Khalifa, whose entrance is conveniently located in the Dubai Mall, is equally spectacular. Unlike the over crowded Empire State Building, a well structured pricing model encourages visitors to make an appointment. (The ‘Top of the World’ costs 100 Dirham ~ $30 if you book in advance and 400D ~ $120 if you don’t.)

We bought our tickets at 10:00 a.m., and by 10:30 a.m., we and taking pictures in the lobby. Everything about the experience was absolutely stunning – from the brief time we waited in line – which features a digital wall display showcasing a history of Dubai – to the enchanting, rapid elevator ride with a synchronized music and light show. When we reached the top (the only way I knew we even moved was my ears popped), the lights and music stopped, and the doors simultaneously. The world awaited.

With a 360 degree view, available both from the inside and out, I could see nearly all of Dubai, from Palm Jumieira and The World to the enormous fountains below. Since the number of visitors is capped, space is readily available on the windows for optimal viewing and photo taking. The only thing I was thinking while looking down at the city below was: “Tom Cruise is absolutely insane”.

We at dinner at a Lebanese restaurant where we sipped on Arek, a strong cocktail made with 50% alcohol. The second story balcony overlooked both the fountain and Burj. When the bill came I was surprised that it only cost $35. In fact, the country was reasonably affordable, much like Las Vegas. Some say it’s because they overbuilt and supply outweighs demand. My theory: they drive down prices to boost tourism and so they can show it off. Whatever the reason, it seems to be working.

At the Palace Hotel, whose atmosphere is even nicer than the title indicates, a rose petal fountain welcomes guests and gold plated everything truly showcases the wealth of the country. It was after midnight when we had a drink on the balcony, and one could still hear the construction from the half finished skyscraper next store, the jackhammer working endlessly through hot, humid night. It’s a staggering 50 stories high, but next to the Burj Khalifa, it looks like a car next to an airplane.