Algorithms to Live by 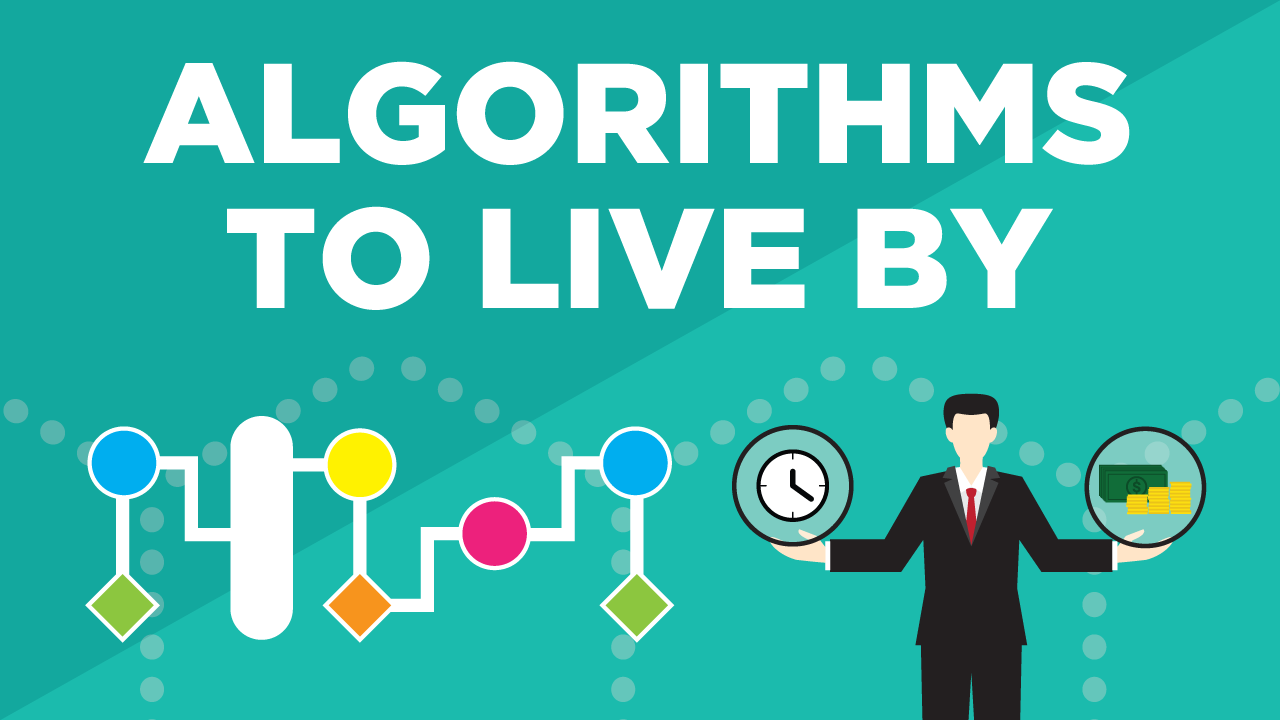 For every action, there’s an equal and opposite reaction.

This post is dedicated to Mike McKay, a poker player who owns a trucking company in Baldwinsville, New York and plays regularly at Turning Stone, who took a 1 hour coaching session with me and didn’t pay for it.

Although we’ve only met a few times, I quickly grew to respect the things I’ve learned from speaking with Rajat Mishra (VP at Cisco). During our first, in person, meeting at the San Francisco Four Seasons Hotel, Mishra shared the three pillars of his life’s philosophy: kindness, courage, and fun.

It’s by these principles that he and his family govern their lives.

An older person needs a seat on the train: Mishra stands and expects nothing in return. It’s the kind thing to do.

A new direction in his life is needed, but he’s scared of what his peers might think: Mishra jumps right in. It’s courageous.

An outing in the park with his kids is interrupted by rain. Mishra and the kids play anyway. It’s fun.

While all three are noble, I find kindness to be the most intriguing. As a senior in a competitive work environment, I asked him how he found the balance between kindness and nativity.

He responded with a question:

“Who gets taken advantage of the most, givers or takers?”

“Right,” he said. “Now which group has the highest levels of happiness and success in life?” He paused while I reflected.

“Also the givers,” he said.

I asked, “Are you saying we should be givers with conditions?”

Mishra, a data analysist by trade, had a technical answer for everything, which became clear to me, later, when he recommended Brian Christian and Tom Griffiths’, Algorithms to Live By: The Computer Science of Human Decisions.

Mishra continued, “The correct approach to life is clearly being a giver. The key, Alec, is making sure that you’re not being exploited by over giving.”

I pressed him for answers, “How do you do that?”

He went straight to the numbers.

“This is one of the caveats to the principle of giving by which I live my life. Researchers have discovered that there’s an optimal balance between reacting and passivity, which will ensure you can reap the long term benefits of being a giver, without the negative repercussions of people taking advantage of you.”

I asked the obvious: “How do you strike this balance?”

He clarified, “You mean, how can you ensure that you’re living optimally?”

“I guess you can say that, I replied.”

“It turns out that the correct ratio is 2/3; in other words, two out of three times someone pulls one over on me, cheats me out of something, or acts in a malicious way, I will respond in some fashion (never physically of course). 1/3 of the time, I’ll simply let it go.”

It sounded reasonable in practice, but something about leaving my life’s decisions to be determined by an algorithm seemed counter intuitive.

As I pondered, Mishra continued.

“This 2/3 ratio ensures that the person can’t attempt to screw you, because most of the time you’re going to respond in a way that’s counterproductive to his desired outcome.

With conviction, he continued, “The ratio is necessary. Leaving it up to chance means you’re too likely to be a push over and let things go; when instead, some form of recourse is necessary. This algorithm removes the emotional component and prevents people from lamenting or wasting time making a decision of how they’re going to respond. I simply look at my tallies—he actually kept track of his altercations—and see if it’s time to respond.”

Mishra did have a point. Following an equation seemed to make things easier, instead of complicating an already difficult situation. Leaving complex decisions purely to statistical chance ensured he was playing optimally, or GTO, as we say in the poker world.

I respect Mishra’s approach. When doing business with him, you know what to expect; he immediately makes you aware of his principles, so people know what relationship they are entering into.

When I got home, I decided to put his theory to the test. I thought back to times in my past when I’ve been burned and wrote out the various instances. I then tabulated the times I responded vs. letting it go. The results disturbed me.

I learned something from this exercise that reinforced a belief I have had to learn the hard way:

Which brings me to the inspiration for today’s blog: Mike McKay, a poker player who owns a trucking company in Baldwinsville, New York and plays regularly at Turning Stone, who took a 1 hour coaching session with me and didn’t pay for it.

I was flattered when McKay reached out to me. I offered him a free consultation via telephone and then we arranged a one hour session. After our lesson was complete, I sent him a long follow-up email with actionable items, forgetting we hadn’t squared our $500 balance.

Being the successful entrepreneur that he was, I didn’t think anything of it. People are busy. It happens.

In our communication, McKay was always very quick to answer. That was, of course, until it came time to pay me. I sent him 3 emails and 4 texts over the course of several weeks. He responded to one text assuring me he’d pay, but it’s been six months and several unanswered attempts. I’ve seen this one before; he’s simply not paying me. (I’m sure that if he’s ever confronted about the situation, McKay will claim he forgot, that he always intended to pay, but he’s not going to now because what I did was so unprofessional. To remove this excuse from his playbook, if he pays, I’ll donate 100% of the money to REG Charity).

In the short term, in a vacuum (meaning if you only look at one isolated incident), most transactions simply are not worth taking any action against, for any form of response will yield a negative expectation. One’s time is too valuable to go after menial situations like McKay’s, and the obvious execration of mental stress and energy toward something negative is both counterproductive and silly. It’s undoubtedly better to just let it go.

Furthermore, there’s a stigma (which I believe we need to overcome) about airing dirty laundry, as if the victim is somehow the bad guy. It’s ironic that exposing any bad business never reflects well, even on the person who was wronged, but when it comes to public perception, I believe that’s just the way it is. Sadly, people also reduce their chances of getting paid, since many people with borderline ethics are only paying to save face, and once that window is closed—because their so called grievance is aired—they’re more likely to not pay.

In the long term, however, I trust that establishing a reputation that you’re a responder will serve four valuable purposes: it discourages people from taking shots at you; it attracts ethical and likeminded people with whom you wish to do business; it prevents storing or repressing built-up stress over time, which could manifest as something more serious; and, finally, it eliminates all thought and emotion from difficult decisions.

The reason I’m releasing a blog of this nature isn’t to out Mike McKay—that’s an added bonus—rather, it’s to help people create systems to better navigate these sticky situations. When I asked countless friends and acquaintances about the altercations they faced, they all agreed that they should respond some portion of the time; otherwise, you risk becoming the giver who is taken advantage of the most from all of life’s takers. If everyone knows you’re a pushover, you’re always susceptible to getting burned.

Interestingly, when I asked friends about the situation in question, the most common response I heard was choose your battles. The implication was that one should only choose the most important things to respond to. This strategy, however, is easily exploitable by people taking cheap shots like Mike McKay, a poker player who owns a trucking company in Baldwinsville, New York and plays regularly at Turning Stone, who took a 1 hour coaching session with me and didn’t pay for it.

If people know that I’m picking my battles—the default strategy of society—it encourages them to pull a cheap one on me. This strategy is way too often exploited. It’s like the overly conservative poker player who only goes all-in when he has a monster hand. He picks his battles alright, and, sure, he wins most of the big pots he plays, but he’s lost so many by getting hammered in the small ones that he’s still a loser long term.

I too advocate for picking one’s battles, but I’m now beginning to believe a randomized approach like Mishra’s just may be the best way to proceed. After all, what better way is there to balance your battle-picking strategy than pure randomness?

This algorithmic methodology serves two key purposes. First, it doesn’t let perpetrators know when you’re going to respond; hence, they are always disincentivized to screw with you (especially once you make them aware of your two-thirds’ rule). The thought that one may go after you for a $50 infraction is scary to some, like an aggressive poker player who’s liable to check-raise all-in at any time.

People give him more free cards. Let’s face it; nobody likes to play pots with players like Tom Dwan.

Second—and this is the clincher for me—it removes emotion, time, and headache from the equation. If my decision to respond is completely left to chance, I don’t have to spend hours agonizing if this is a battle I should choose. I simply roll a 3 sided die and leave it to fate. Or I could ask a friend to pick a number between one and three. Or find a cool probability App.

The possibilities are endless.

I regret to inform my reader that this post was not randomized, but, instead, it’s compensation for a lifetime of passivity. I feel like the poker player who’s been folding all night and then 4-bets cold with J4s; just because he deserves to win a pot. That said, I’m committed to ⅔ randomness from here on out.

I hope you enjoyed this article and I’d love to hear your thoughts on the philosophy of respond vs. not responding. Do you take recourse against the tricksters of the world? How often? How do you decide which cases to let go vs. which ones to respond to?

I’d greatly appreciate your thoughts in a comment below.

In my next blog, I’m going to share some practical tips for maintaining integrity in tempting situations, so be sure to subscribe to stay tuned for more on this topic.

How to 10x Your Gratitude Practice