A Memorable Night of Poker on Poker Night in America 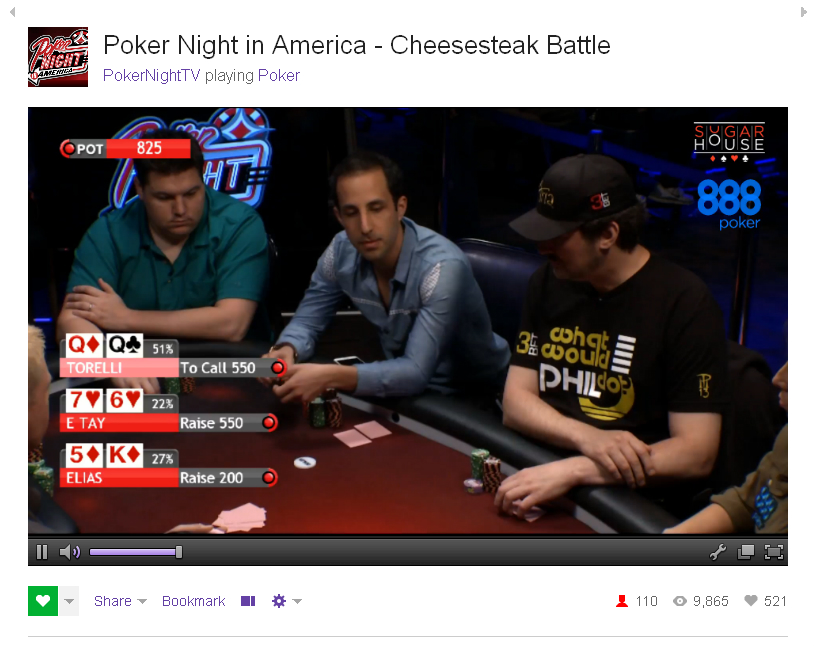 I had a blast at Poker Night in America. Televised events are a great opportunity to promote poker in a positive way and compete under the bright lights, where the pressure of the world watching challenges one to compete at a higher level.

Live cash games (my favorite form of poker) are never really about the cards, but the people.

And on PNIA it was awesome to have a diverse, eclectic group to banter with.

I was surprised at how comfortable the game felt. Perhaps it was the pleasant setup, attentive casino staff and crew who worked tirelessly to make us feel like it was just another day at the poker table.

I never once noticed the cameras or felt the pressure of the game inflicting with my decision making.

I had yet to visit Philly, but was pleasantly surprised with the charming and green downtown area, a short Uber (formerly taxi) ride to the SugarHouse Casino. The Casino is just outside the city center, an enjoyable drive passing along the beautiful Ben Franklin Bridge overlooking the harbor. It reminded me of Brooklyn.

Like most poker players of my generation, I grew up admiring the greats of the time. Phil Hellmuth was the first of many role models. During my senior year of high school, I closely identified with his story: a college dropout who risked it all to pursue his dream of playing cards and made it. He did it. Why couldn’t I?

I absorbed every page of his Play Poker Like the Pros, profiling my opponents like he suggested and crushing my high school friends for their lunch money.

A decade later, Phil Hellmuth, Shaun Deeb and myself sat together during the dinner break from the poker game. The real Phil Hellmuth is different from the spectacle one sees on TV.

Even he won’t deny he has a big ego, but what they don’t neglect to portray is that his heart is even bigger.

What I found inspiring is that his frustration from losing stems from his undying passion for the game, and his desire to be remembered for greatness. It’s admirable to see the sacrifice and dedication he’s made for poker.

When I asked him if he ever wanted to pursue other endeavors, he was quick to answer.

“I decided a long time ago that if I was ever going to be remembered for something, it wasn’t going to be for writing another book, even if I’m lucky enough to have it become a NY Times Best Seller. It’s going to be for being the greatest poker player of all time… and that means I need to win bracelets.”

Very few are as passionate and dedicated as he is. It’s that undying love for their craft that’s seen so rarely present in athletes, yet always present in the great ones.

In some ways though he is what one would imagine: to put it modestly he is very proud of what he’s done in his poker career. (Then again, can you blame him?)

And there’s just something about his table talk and image (not to mention the mere bragging rights) that make it hard not to take a shot and try to bust him at the table.

In one hand I found myself calling a re raise with 77 out of position, a hand I’d normally fold, just in case I flopped a set and wacked him. It goes beyond math; it’s a check on the bucket list.

But another, surprising, far more seldom ‘check’ was something even cooler than inducing a classic Phil Hellmuth blow up. I received a genuine compliment from him. He berates everyone’s game. Rarely does he praise it.

I raised in mid position with 99 to $150 on $25/$50 blinds. Chad Holloway, a staff writer for PokerNews who had been playing incredibly solid, called to my immediate left. Shaun Deeb 3 bet from the highjack to $600.

Phil Hellmuth nearly leaped out of his chair! “There’s maybe 5 or 6 people in the world who can make that fold,” he said, giving me a fist pump. “Now we’re playing poker boys!”

It was a special moment. I had come full circle, being complimented as equals by the person I grew up longing to become.

The following night, the three of us dined again. Phil was preparing for a speech for a group of prominent tech CEOs, and was debating on subject matter.
“I think I’m going to talk about ego,” he said, with a face that knew laughs were coming.

Some may say he’s qualified. True perhaps, but for every eruption he’s usually the first to man up and admit he’s wrong. We all at times suffer from lack of character, but few have the self awareness and courage to admit it. Phil is excellent at that.

As cool as it was to be flattered on television by Phil, it was cooler to just talk openly with him off the camera. To get to know him for who he really is: a giddy, passionate poker player who underneath it all is a good guy.

Poker Night in America was symbolic of why I play poker.

It’s a multi dimensional game, so much deeper than merely the cards that professionals manipulate for a profit.

It’s about competing with the best, challenging oneself to improve both on and off the felt, and enjoying the people whom you spend your time with.

It’s what makes poker one of the greatest games in the world; simple yet challenging, frustrating yet rewarding, all crammed into two hole cards and a few rounds of betting.